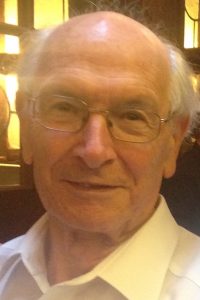 Father Alois Osterwalder, founder of the Ostasien-Institut (OAI) in Bonn (Germany), and well-known in circles of music researchers as an indefatigable organizer and promoter of Chinese musical culture, has died from heart failure at his home in Rösrath in Germany. He passed away peacefully during an afternoon nap on the 23rd of July, 2021. He was 88. Participants in CHIME meetings will perhaps remember him best for the recordings of traditional music, opera costumes and musical instruments which he arranged to be collected in Taiwan. These were kept at the Ostasien-Institut since the 1960s, were the subject of various documentary films and academic presentations, and were returned by OAI to Taiwan as a gift in 2018, to be formally exhibited and researched there.

In 2015 Osterwalder was awarded the Taiwanese-French Culture Prize by the Fondation culturelle franco-taiwanaise in Paris for his life-long services in the realm of cultural exchange between Europe and Taiwan. Osterwalder set up cultural and academic platforms, organized exhibitions and international conferences, such as ‘Europe meets China, China meets Europe’ in 2012, and in October 2014 the fine symposium ‘The Strange Sound’, devoted entirely to Chinese music, held at his institute in Bonn, events which resulted in fine book publications.

Those who have had the privilege of meeting Alois Osterwalder in person will remember him as an extraordinarily kind, sensitive and committed man, very much the person to build bridges, not just between cultures, but between individual human beings. Undoubtedly this was at the heart of everything he undertook: his curiosity towards others, and how one might bridge gaps between people from very different cultural backgrounds, and arrive at a better understanding of what moved them. His wisdom and his fine sense of humour – those who knew him will remember that special twinkle in his eye! – must have stood him in good stead in these tasks.

As he told a Swiss newspaper reporter in 2010: “I have always had China on my mind, from the time when I was a child. I also dreamt of it.”

Alois Osterwalder was born 19 February 1933 on a local farm in Engelsburg in Switzerland. Dreaming of China, and keen to become a missionary, he attended the Gymnasium of the Steyler Missionaries in Rheineck, studied theology in Mödling near Vienna, and became a priest, but also an academician. In both qualities he spent a lifetime building bridges between the West and East Asia.

Pursuing his studies in Munich and in Bonn, he took up Sinology in 1960, at a time when China was redder than red. Osterwalder kept up his interests in Chinese culture, and also in the cultures of wider Asia, notably Japan. But China was his most important focus. He helped talented young Chinese to pursue their studies in the West, and in 1965, with like-minded friends, including the China-born musician and composer from Taiwan, Shih Wei-Liang, founded the China-Europe Association (Arbeitsgemeinschaft China-Europa), which eventually (in 1969) became the Ostasien-Institut.

Osterwalder raised funds for Shih Wei-Liang to return to Taiwan to establish Taiwan’s first musical library, and to contribute to Taiwan’s Folk Song Collecting Movement by collecting songs and theatrical music among Chinese and regional indigenous communities, including people who had migrated from Mainland China in the late 1940s. A further aim was to establish a Centre for Chinese Music Studies in Bonn. The materials which Shih Wei-Liang sent to Germany were carefully stored and preserved, and formed the basis for this Centre, and for the Institute’s Bonn Collection of Taiwan Music. Alois Osterwalder spent the final decade of his life continuing his passionate work of cultural promotion and exchange, but he suffered a heart insufficiency in 2019 and had to take things more easily. During his final years he enjoyed ample support from his partner Shu Jyuan (Claire) Deiwiks, who was closely involved in his Taiwan projects and became a treasured friend.

Alois Osterwalder has been cremated, and his ashes will be strewn out at the root of a Gingko tree – perhaps in a fitting tribute to the continued meaningfulness of a life that was filled with good aspirations, and may serve as a model for many of us.